Metrology comes from two Greek words: “metron” and “logos” which literally means “the study of measurements”; it is the science of measurement.

The Bureau International des Poids et des Mesures – BIPM, tells us: “Metrology is the science of measurement; it encompasses both experimental and theoretical determinations at all levels of uncertainty and in all fields of science and technology.” 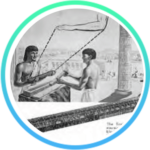 etrology began centuries ago, during the first commercial transactions. The Egyptians defined the length of one foot. They defined the length of the Roman finger and then the Roman foot, 16 fingers – a Roman foot is 296 352 µm, how precise! Metrology emerged essentially for economic reasons. The accuracy of a weighing or measurement affects the exchange of materials, a measurement error can distort the completeness of a transaction.

Let’s take an example: Mr. X buys a kilogram of vegetables every week, which can be found all year round. However, the balance of the vendor is not properly calibrated. At each kilogram sold, the real mass is 950 grams; 50 grams do not seem to be significant, but after 52 weeks, Mr. X will have lost 2.6 kilograms of vegetables!

Mr. X is decidedly unlucky with his vegetables. But luck is changing! Every two weeks, he will refuel at the pump – 50 liters, it’s not a big car, a small petrol engine. At each litre of gasoline distributed, the pump is incorrectly adjusted and distributes 2 centiliters more, the equivalent of one tablespoon per liter, negligible! A quick calculation shows that at each refuelling, the gas pump operator loses 100 cL of petrol; every year, 26 liters of petrol are offered to the customer, about 30 euros per customer and per year, the odds change.

Today, metrology is much more advanced. It is used in major technological fields. 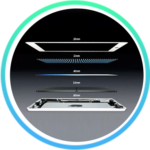 You have a tablet – a machine that seems so simple these days – but if you look inside, you will begin to understand the great part metrology plays in the design of this object. For such a sophisticated touch screen, thickness measurements are critical to the shape and function of the product. These are just examples. But if you look around you, you will see the essential part metrology plays in everything we do.

All industries depend on metrology for the quality of their work – in fact some of them have costs that are 50% dependent on metrology.

A bit of history

In 1790, in the midst of the French Revolution, the French National Assembly asked the French Academy of Sciences to “deduce an invariable standard for all measurements and weights“. The unit of length decided was the metre. This name was derived from the Greek word metron, meaning measure. The other units were to be derived from the unit of length. Thus, an evolved system in which the basic units of the system are linked to each other was born.

It was decided that the larger and smaller versions of each unit should be created by multiplying or dividing the base units by 10. Calculations in the metric system could therefore be performed simply by moving the decimal point. The metric system is a decimal system.

The metric system was not initially accepted with much enthusiasm.

However, France made its use compulsory in 1840. Adoption by other States took place on a regular basis – the standardized metric characters and decimals were well suited to scientific work.

An act of the United States Congress in 1866 made it possible “to use the weights and measures of the metric system in all contracts, transactions or legal proceedings”.

In 1900, a total of 35 States, the main countries of continental Europe and most of the states of South America, officially accepted the metric system.

The CIPM‘s constant efforts to improve the metric system have resulted in the addition of new units of measurement: metre, kilogram, second, ampere, kelvin, mole and candela. The International System of Units of Measurement was born.

The modern version of the SI metric system has seven basic units from which all other units of measurement are derived.

Today, only the kilogram remains a unit based on a physical artifact, the standard kilogram, kept near Paris. All other units are defined in terms of wavelength and time, which can be measured and reproduced with a high degree of accuracy.

The measurement is the set of operations whose purpose is to determine an experimental value – taking into account the environment – called measurand by comparing it directly or indirectly to a standard which is the material representation of the unit in which the measurand will be expressed.

Errors inevitably occur in any measuring system:
– the measuring system is never perfect since it is generally more or less sensitive to the environment (temperature, pressure, humidity…).
– the standards used to calibrate the instrumentation are only an imperfect materialization of the definition of the unit that they are responsible for representing – the wrong definition of the quantity is itself a source of error.

We must therefore calibrate our measuring instrument – that is the art of metrology. Comparisons can be used to calibrate – to ensure that the values returned to us correlate with the values based on those of the standard. It is the repeatability of measurements that ensures a correct result. 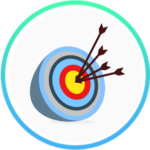 Without precision, no standardization, no industrialization.

“Anyway, I still have the books to teach myself.” No, even are the printers calibrated by this thousands of years old science: metrology.