The defined solid angle technique (DSA) is a primary method for measuring any radionuclide, deposited or electro-deposited on a solid surface, that decays by alpha emission.

The LNHB experimental device consists of an implanted silicon semiconductor detector and a collimator, located between the source and detector, that accurately defines the solid angle of detection. The unit is installed in a vacuum chamber. 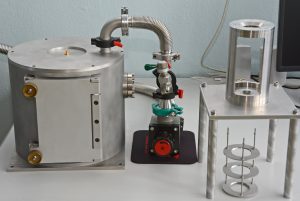 The defined solid angle counting (DSA) method is an absolute so-called primary method. It is based on the use of dimensional quantities and makes it possible to obtain the activity of the measured source without calibration, which is only proportional to the number of counts detected and the solid angle characteristic of the device. In order to obtain measurements of high metrological quality, it is therefore essential to know this solid angle with the best possible uncertainty. For this reason, the dimensions of the device, i. e. collimator diameter and source-detector distance, are known with an uncertainty of a few micrometers and are traceable to national dimensional metrology standards.

The LNHB’s DSA detector can measure sources with a diameter of 30 mm or less, and only alpha emitters emitted from the source are taken into account by the detector. As a result, this source should not absorb them, i. e. it should be fine enough to avoid any energy loss of the alpha particles by self-absorption. The alpha source preparations are therefore specific and will consist of depositing or electro-depositing the radionuclides to be measured in such a way that the deposition is as fine and regular as possible.
The signal from the detector is not directly usable, so it is processed and amplified via an adapted electronic chain consisting of a resistive reaction preamplifier, an amplifier, a digital analog encoder that converts the signal and a multichannel analyzer. This electronic chain is checked before and after each measurement in order to ensure its correct operation.
Like all LNHB devices, it is essential to take into account the counting time with high precision. An ad-hoc system is present to connect the acquisition start and end times to the Universal Time Coordinated.
DSA measurement can measure alpha-emitting radionuclides, for example: 241Am, 238Pu, 239Pu, 240Pu, 244Cm, 237Np in a range from a few hundred mBq to several hundred kBq deposited on a solid source with a minimum uncertainty of 0.2%.

To measure the relative intensities of peaks or detect impurities, a better resolution is needed. For this purpose, a device with a smaller detector with a detection efficiency significantly inferior to DSA is used. It allows a better separation of adjacent peaks.
This measurement method is called secondary and requires energy and intensity calibration. It makes it possible to measure the same type of source but with uncertainties slightly less good than DSA.