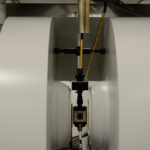 Among the methods used in transfer dosimetry for ionizing radiation metrology, alanine’s electronic paramagnetic resonance spectrometry (EPR) is applied to ensure the traceability of doses in various fields of application, including that of health, which includes several sectors:

EPR was discovered in 1945 by E. Zavoisky and is today a classic method of analysing the structure of matter used in physics, chemistry, medicine and biology. EPR spectrometry has the advantage of being a non-destructive method, so measurements can be taken on the same sample several days or even years after a first acquisition.

EPR spectrometry is a method based on the resonant absorption of a hyperfrequency wave by a paramagnetic species placed in a magnetic field. This technique makes it possible to measure the concentration of free radicals, in particular those induced by irradiation in organic or inorganic materials.

To detect the EPR signal of a sample, it must be placed in a suprasil® quartz tube inserted into the resonant cavity in the center between the two electromagnets.

L-α-alanine is one of the 20 amino acids mainly found in peptide chains of proteins having C3H7O2N for raw formula.

In powder form, alanine is compressed into pellets. The dosimeter used at the LNE-LNHB consists of four pellets packaged in a watertight container.

The irradiation of the alanine pellets creates free radicals whose concentration is measured by EPR.

Alanine dosimeters are conservative, stable and reproducible. Their EPR response is linear as a function of dose. They are good integrators and are not very dependent on dose rate and the quality of radiotherapy beams. The main advantage of alanine lies in its composition, which is very close to that of living tissues and can be considered as tissue equivalent towards radiation. This makes it an excellent tissue equivalent dosimeter in a wide dose range from 5 grays to 100 000 grays. Uncertainties on absorbed dose measurement and air kerma are in the range of 2-3% at k = 2.

The EPR/alanine technique has been used for many years, mainly for the reference dosimetry of high doses: calibration of irradiators, sterilization of medical equipment, food… However, more recently, the technique has been extended to the measurement of lower doses from 2 Gy to 50 Gy, for the transfer of calibration of radiotherapy beams. Dose measurement methodologies adapted to new small beam sections such as helical tomotherapy (Perichon, 2011), CyberKnife® (Garcia, 2011) and GammaKnife® (Hornbeck, 2014) are being developed, particularly for quality control.