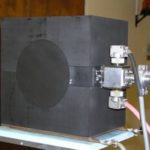 Calorimetry is the best technique for absolute and direct measurement of absorbed dose. It is based on the measurement of the temperature rise of a given volume element of this instrument when it is exposed to a source of radiation. The graphite and water calorimeters are used as the basis for references of absorbed dose in water which is the reference medium for radiotherapy. Indeed, water and graphite are close to biological tissues because of their composition or atomic number.

The LNE-LNHB has developed and constructed several models of these two types of instruments for reference measurements in different radiation fields (electrons, medium energy X-rays, high energy photons, neutrons and protons). This is for water absorbed dose rates greater than 0.5 Gy/min, such as those used in radiotherapy treatments.

The water calorimeter is designed to operate at 4 °C, at which temperature the density of the water is maximum, in order to minimize convection currents inside the volume of water used for measurements. The inside of the calorimeter consists of a radiotherapy water phantom of (30 × 30 × 35) cm3. 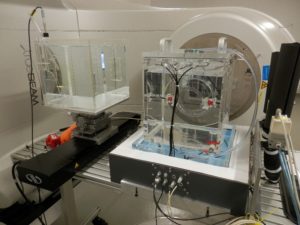 The temperature increase under irradiation is measured by two temperature probes whose sensors are thermistors whose resistance varies according to the temperature following a known law. These probes are placed inside a cylindrical quartz bulb filled with ultrapure water saturated with nitrogen. The saturation of the water with nitrogen results in practically no heat loss of the water, i. e. all the energy deposited in this volume of water by the radiation is converted into heat. Indeed, ionizing radiations are at the origin of the water radiolysis process which initiates a complex set of chemical reactions that can disturb the measurement. 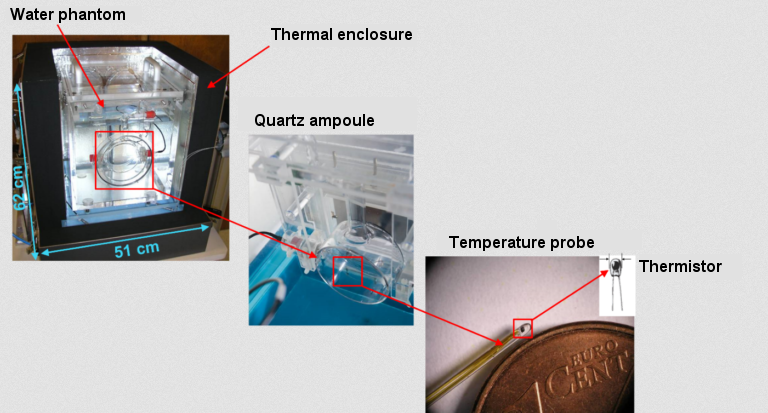 The temperature of the water phantom is regulated at 4 °C by a cold air circulation inside the thermal enclosure of the calorimeter. The absorbed dose in water is obtained directly from the product of the measured temperature rise and the specific heat capacity of the water. The relative standard uncertainty of the absorbed dose in water obtained by water calorimetry is between 0.5% and 1% depending on the radiation field. 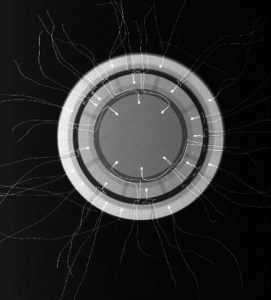 The graphite calorimeter is a solid calorimeter made up of several concentric bodies, usually three, (from the inside to the outside: core, jacket and shield), inserted in a block of the same reference material. The core is the sensitive part of the detector, where the radiation-induced temperature rise is determined. Its mass must be perfectly known, so as to deduce from the reported energy the value of the average dose absorbed in this element. Several graphite calorimeters have been built with cores from 6 mm to 30 mm in diameter.

The different bodies of this set-up are suspended so as not to have direct contact with each other, and placed in a vacuum enclosure to insulate them thermally. 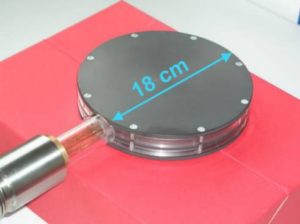 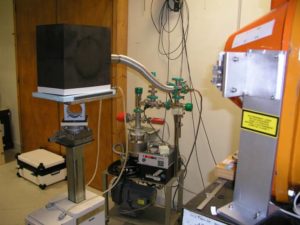 A graphite-water transfer is necessary to obtain the absorbed dose in water from the dose in graphite. It can be done by Fricke chemical dosimetry or Monte Carlo calculations. The relative standard uncertainty of the absorbed dose in water obtained by graphite calorimetry after graphite-water transfer is between 0.3% and 0.4% depending on the radiation field.