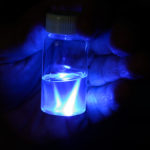 Liquid scintillation is a radioactive activity measurement technique whose principles were established in 1950 by two independent American teams (Kallmann, 1950 and Reynolds et al., 1950).
The first commercial detector was developed in 1954 (Packard Instruments) and since then, many generations of counters have followed one another and can be found in all measurement laboratories around the world.

Liquid scintillation devices are mainly used for the activity measurements of aqueous samples in environmental monitoring, and more specifically for radionuclides decaying by pure beta transition or electronic capture, for which gamma-ray spectrometry methods are inoperative.

The basic principle is to mix an aliquot of the solution to be measured with a scintillating liquid. The radiation emitted by the decay of a radioactive body then excites the scintillator, which emits light.
The detection of light pulses by a photomultiplier (PM) allows to find the activity present in the aliquot, defined as the number of radioactive decays per unit of time.
Commercial liquid scintillation counters typically have a detection efficiency (probability of decay leading to a detectable light pulse) lower than the unit. Therefore, these counters must be calibrated in order to be used quantitatively.

As the national metrology institute, LNHB develops methods for the primary measurement of activity by liquid scintillation, enabling the production of national standards.
Thus, the measurement technique used at LNHB uses a specific counter with three photomultipliers and its principle is based on the free parameter model: the ratio of the number of triple coincidences (three simultaneous photomultipliers) and double coincidences (two simultaneous photomultipliers) makes it possible to find the intrinsic luminous efficiency of the scintillator, proportional to the average number of light photons emitted by absorption in the scintillator of an electronic energy unit.
The knowledge of this free parameter allows, in fine, to calculate the detection efficiency.
This method is known in the literature as the Triple to Double Coincidence Ratio (TDCR in english, RCTD in french) method.