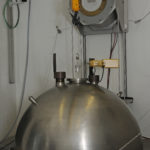 The manganese bath method is widely used in NMIs as a reference measurement method for the emission rate of neutron sources [1]. Neutrons are not directly ionizing particles and their metrology requires the use of nuclear reactions. The main constraints of neutron metrology stem on the one hand from the very wide range of energy covered (from 1 meV to about 10 MeV) and on the other hand from the wide variety of possible reactions between neutrons and matter: diffusion, radiative capture, fission and spallation. Since 2009, the LNHB has had a new facility that complies with radiation protection standards and can accommodate sources with a maximum emission rate of 109 n. s-1.

The principle consists in immersing the neutron source to be measured in the centre of a sphere containing a manganese sulphate solution[2]. The neutrons emitted by the source then interact with the bath and lead to the creation of a radioactive isotope of manganese, the 56Mn, by radiative capture of neutrons on the stable manganese of the bath. Radionuclide 56Mn (T1/2 ~ 2.58 h) decays by beta emission to excited 56Fe levels through several gamma photon cascades including a main one at about 847 keV.
Once the source is introduced into the bath, activity in 56Mn begins to increase to a saturation level. This level is reached in approximately 25 hours, or ten periods of 56Mn. If the source is maintained in the bath, the activity in 56Mn remains stable, which corresponds to the situation where the number of atoms of 56Mn created per unit of time is equal to the number of atoms decaying by β transition during the same time. The emission rate of the source is then expressed as the ratio between the activity in 56Mn of the saturation bath and the yield of the bath, corresponding to the probability that a neutron emitted by the source creates a 56Mn atom.

The 56Mn activity is measured either by direct method using, for example, primary measurement instrumentation such as 4πβ-γ or TDCR (Triple to Double Coincidence Ratio), or by indirect method with γ counting via a NaI detector (previously calibrated) or the use of a known reference source. The yield of the bath is determined by Monte-Carlo calculation from a complete modelling of the experimental device (armoured cell, manganese bath, source, supports), the source, and physical processes describing neutron interactions with matter.
The sources concerned are of the following type (α, n): AmBe, PuBe, RaBe, PuLi; spontaneous fission: 252Cf, 242Cm; mixed: 244CmBe, or (γ, n) PuBe.
The measurement range is in the order of 105 to about 109 n. s-1, with a standard uncertainty of about 1-2%.

The measurement of neutron source emission anisotropy is complementary to that of the emission rate [1,2].
Indeed, the dimensions of the source, its shape and its internal assembly can lead to the degradation of the emission isotropy, the emission rate is no longer constant according to a central symmetry but axial when for example the source is cylindrical.
It is then necessary to determine the angular emission of the source with respect to the symmetry axis.
This measurement is carried out at the LNHB using a long proportional counter containing BF3.
The source is placed in the air on a rotating support and the relative neutron emission rate is measured at a solid angle of about 7.10-2 sr.
The measurement is made by rotating the source in steps of 15 degrees around a vertical axis and perpendicular to its axis of symmetry.
The neutron scattering effect in the measuring cell is compensated by similar acquisitions using a shadow cone.