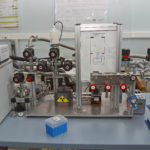 Radon, a naturally occurring radioactive gas, produces radioactive isotopes of lead, bismuth and polonium. It is present in the environment at concentrations that vary from region to region. It is thus one of the main factors of exposition to ionizing radiation for populations. 222Rn is identified as the second risk factor for lung cancer, so on-site measurements are needed to identify risk areas. This monitoring is done using a variety of commercial measuring devices that need to be calibrated. To ensure metrological traceability of radon and its progeny, LNHB has developed a primary standard of 222Rn.

This 222Rn standard consists of a measurement by alpha spectrometry of a frozen radon source using the Defined Solid Angle method. The installation is a set of secondary vacuum tubes and valves (10-4 Pa) divided into three distinct parts.
The first part consists of a 226Ra source producing 222Rn. It is connected to a pumping assembly and allows the production of 222Rn quantities ranging from 100 Bq to 3 MBq depending on the chosen accumulation time.

This 222Rn migrates to the second part of the set-up which is a measuring chamber on the surface of a cold finger whose temperature is stabilized at 80 K (-193.15 °C). The source thus produced is a 222Rn frozen disk which is measured by the ASD method with an alpha detector with an intrinsic yield of 100%.

Once this measurement is completed, the cold finger is warmed up and radon will migrate to the third part of the device: a metal container bathed in liquid nitrogen. When the container is closed, the activity contained in the standard is known with a relative standard uncertainty of 0.3%.

This method has proven its robustness through several comparisons with other ionizing radiation metrology laboratories around the world. It remains today the most accurate and best defined method for the production of 222Rn primary standard.

The thoron concentration in France is estimated to be one tenth of that of radon and is therefore a significant public health issue. Like radon, this radioactive gas produces radioactive isotopic progeny of lead, bismuth and polonium. However, it has a much lower half-life than 222Rn, T1/2(220Rn) = 55.8 s; so it is not possible to use the method described above. To meet the need for traceability of measurements of this descendant of natural thorium, a primary standard instrument has been developed and validated at the LNHB with the cooperation of IRSN/LPMA. This device will be use to calibrate instruments that measure activity concentration of thoron in air.

The laboratory has thus created a measuring device to ensure metrological traceability of a stable 220Rn atmosphere produced with a 228Th solid source under the calibration conditions of a measuring instrument. The detection principle is based on a measurement volume using an alpha detector whose volume has been optimised by Monte-Carlo method in order to detect the gas. The decay product are captured on the detector surface using an electric field adapted to the flow inside the measurement system (optimisation by Multiphysics simulations). After a validation of the system using the primary radon standard, it was thus possible to develop a transportable measuring instrument ensuring the traceability of a thoron atmosphere with a relative standard uncertainty of 1% in the best case (limited by counting statistics).

The device has been qualified for pressure ranges of 900 to 1050 hPa, 18 to 24°C, 0 to 90 %RH and can operate at a flow rate between 0.8 and 2 L/min. The good quality of the spectra obtained also allows it to be used to separate 220Rn and 222Rn using peaks of radon and thoron solid progenies. This standard device was validated by a comparison with a method developed in Italy (ENEA) as well as in a calibration procedure of a commercial measuring device previously calibrated by Germany (PTB).