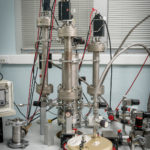 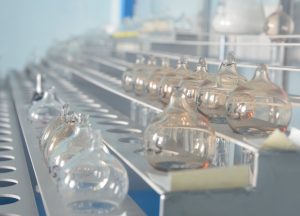 The LNE-LNHB calibrates the volumic activity (Bq/cm3) of radioactive gases under normal pressure and temperature conditions (TPN, 273.15 K and 1013.25 hPa) using the primary method of triple differential proportional counters. Proportional counters are filled with a mixture of calibration gas and propane. Following radioactive decay, the particles emitted will ionize the propane molecules; the electrical charges created are collected by means of high voltage. The signal, given by the number of charges collected, is proportional to the absorbed radiation energy. A specific electronics allows the signal to be formatted to minimise the detection threshold (< 200 eV) on the one hand, and on the other hand to insert an extendable dead time to ensure high accuracy in the counting time. The number of detected decays per second is proportional to the activity of the radioactive gas present in the counters.

The triple differential method is a primary method, i.e. it does not require calibration with radioactive sources; it consists in using three cylindrical proportional counters of the same design but of different lengths (long, medium and short). Three volumic activities are obtained by subtracting two by two the activities measured by each counter divided by the difference in their volume. The volumic activity of the difference between the counts of the long and short counters gives the reference value. The other two volumic activities between long and medium, and medium and short must be equal to the first one. This is to verify that there was no malfunction during the measurement. This differential method makes it possible to avoid the side effects of counters where electrical field inhomogeneities occur that affect the collection of charges.

The radioactive gases calibrated by the LNE-LNHB decay by beta emission or electronic capture: tritium, 85Kr, 133Xe, 131mXe and 127Xe. The gases to be calibrated are taken from containers such as glass ampoules, B5 type bottles or SG500G and SG3000G containers. The TPN volumic activity range covered by the measurement goes from 2.5 to 15 kBq/cm3 with a relative uncertainty (k=2) of less than 1.2%

LNE-LNHB is also able to supply gaseous standards of the radionuclides listed above in 1.5 or 5 L bottles at pressures up to 20 MPa (200 bar) or in SG500G and SG3000G type containers.