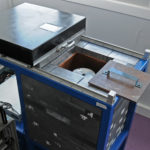 The 4πγ-counting technique is widely used in the field of radioactivity metrology since the 1960s and recognized as a powerful primary method for the standardization of radionuclides decaying with abundant gamma emissions [1, 2]. 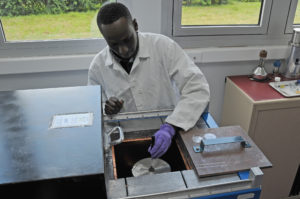 The method is based on the use of gamma-ray detectors with almost 4π geometry, e.g. a large well-type NaI(Tl) detector or two NaI(Tl) detectors sandwiching the radioactive source. Due to the summing properties of such a detector, the method have turned out to be very powerful instruments, particularly for the metrology of gamma-radiation emitting radionuclides with complex decay schemes incorporating coincident photon transitions. For a few coincident gamma rays, the efficiency approaches nearly 100% and the uncertainty becomes very small (close to 0.1%) and generally independent of a knowledge of the precise values of the decay-scheme parameters. In such cases, the 4πγ technique represents a less complicated alternative to 4πβ-γ coincidence counting with similar or even better standard uncertainties. 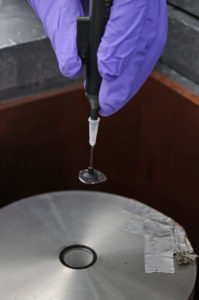 The dedicated instrumentation employed at the LNHB has the following geometry characteristics: 152 mm diameter and 127 mm cylinder height with a coaxial re-entrant hole of 21 mm diameter and 47.5 mm height. The scintillation detector (coupled with a photomultiplier tube) is housed in a shielding composed of an internal 1-cm-thick layer of Copper and an external 15-cm-thick layer of Lead in order to reduce the background rate (of about 16-20 s-1). The counting system is based on separate NIM modules, with a homemade discriminator module (MTR2) based on extendable dead-times and the live-time technique. The activity is then obtained from the response of the detector (the mean count rate corrected for dead time effects and background) and the detection efficiency specific to each radionuclide (obtained by means of Monte Carlo calculation) [3].

The measurement limits is from few tens of Bq to few hundreds of kBq, with standard uncertainties in the range of 0.1% to 0.5% for high-efficiency radionuclides such as 133Ba, 192Ir or 207Bi.