Simulation of radiation interaction in matter 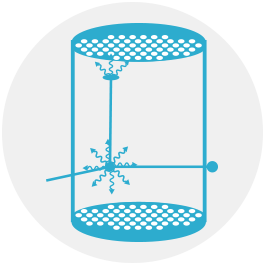 The simulation of radiation interactions in matter, in particular using Monte-Carlo codes, has become an indispensable tool in ionizing radiation metrology. It optimizes radiation measurement and production devices during their design and helps to understand the experimental results, both qualitatively and quantitatively. These calculations make it possible to determine corrective factors, particularly when they are not available experimentally, such as detection efficiency values or the characteristics of the radiation beam produced by a source (energy distribution, angle, etc.).

As a result, simulation is a cross-cutting activity that occurs in a large number of studies conducted at the LNHB. Thus, the LNHB can use several codes (EGS, PENELOPE, MCNPX, Geant4). The choice depends on the applications. As far as possible, the same calculation is carried out using several different codes in order to identify possible biases.

The TDCR activity measurement method is a primary method using a liquid scintillation counter with three photomultipliers. A statistical light emission model is used in most NMIs to determine the activity.

Using the Geant4 simulation code of radiation interaction in matter , including photon light interactions, LNHB has developed a stochastic approach to model all the processes leading to photoelectron creation in photomultiplier photocathodes: interaction of ionizing radiation, creation of luminous photons in the scintillator, monitoring of their trajectory (including phenomena associated with geometric optics such as refraction and reflection at the interfaces of the optical cavity) until their arrival on photomultiplier photocathodes.

This new TDCR-Geant4 model has made it possible to highlight a phenomenon of stochastic dependence of geometric type between photomultipliers: this effect is visible for radionuclides emitting low-energy radiation when the counting of coincidences becomes sensitive to the origin point of photon emission in the flask containing the liquid scintillator.

The light response of the scintillators used in the Geant4 model was experimentally verified using a low-energy X generator.

The TDCR-Geant4 model is extended to the 4πβ-γ coincidence method in order to optimize the conditions of application of the detection yield extrapolation technique.