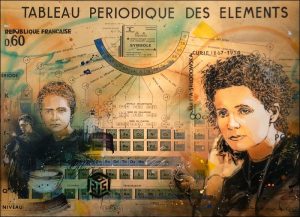 Born 150 years ago in Poland, Marie Curie was the first woman to teach in higher education, but above all she was the only one to receive two Nobel Prizes: the first in physics in 1903, with her husband Pierre, and the second in chemistry in 1911.
She manufactured and certified the first radium standard and, during the First World War, she contributed to the development of medical imaging by setting up radiological cars that travelled across the battlefields to detect shrapnel from wounded soldiers.
She perfectly represents all the perseverance and skill needed to study radioactivity and its applications.

Find some information about her life in the following links:
A short biography on Franceinfo.fr: Marie Curie, the first woman to win a Nobel Prize (fr)
An article by Bert M. Coursey in Applied Radiation and Isotopes: A reflection on the 150th anniversary of the birth of Marie Curie
On francetvéducation.fr: Curies’ first research on radioactivity (fr)
On FranceInter.fr: Sur les épaules de Darwin – Discovering radioactivity (March 26, 2016 broadcast)
Check out the Curie Museum’s 2017/2018 cultural programme dedicated to the 150th anniversary of Marie Curie.
First report by Marie Curie to the Académie des sciences on April 12, 1898: Radiation emitted by uranium and thorium compounds (fr)