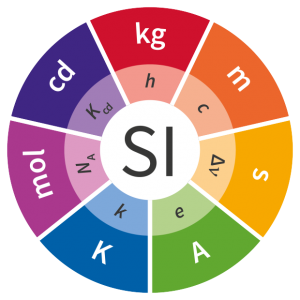 In the revised SI four of the SI base units – namely the kilogram, the ampere, the kelvin and the mole – will be redefined in terms of constants; the new definitions will be based on fixed numerical values of the Planck constant (h), the elementary charge (e), the Boltzmann constant (kB), and the Avogadro constant (NA), respectively. Further, the definitions of all seven base units of the SI will also be uniformly expressed using the explicit-constant formulation, and specific mises en pratique will be drawn up to explain the realization of the definitions of each of the base units in a practical way.
(source BIPM)