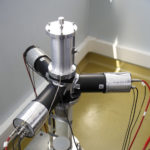 Widely used in the field of radioactivity metrology, the 4πβ-γ coincidence method (Campion, 1959) is a direct method developed for measuring the activity of radionuclides whose decay is accompanied by at least two distinct types of ionizing radiation. Its use is not limited to the measurement of β-γ emitter activity, it also applies to radionuclides whose α or by electronic capture decay is followed by the emission of γ photons. In addition, the instrumentation can be adapted to γ-γ coincidence measurement for radionuclides such as 125I.

The principle of the 4πβ-γ coincidence method (Bobin, 2007) can be described in a simple way in the ideal case of a radionuclide decaying by β- emission followed by the simultaneous emission of a γ photon. The detection device and counting electronics consist of two separate and independent channels (known as β and γ), each of which is exclusively sensitive to a single type of radiation. The peculiarity of the coincidence method applied with classical instrumentation lies in the addition of an extra channel (called coincidence channel) whose counting is incremented each time a decay is detected simultaneously in the two channels β and γ.

The activity of a radioactive source is determined by calculating the ratio between the product of the individual channel count rates (β and γ) and the coincidence count rate. The particularity of the method is that this calculation does not require knowledge of the detection efficiency of the detectors used. In the real case of an excess counting in the β channel due to γ radiation of the source, the extrapolation technique is applied by variation of the detection efficiency in the β channel.

At LNHB, the instrumentation dedicated to the coincidence method is composed of specific electronic modules developed in the laboratory, operating on the principle of extendable dead times and on the measurement of active time. Thus, when coincidences are counted using a resolution time, an instrumental correction of coincidences is possible without applying classical Cox and Isham formulas (Bouchard and Vatin, 1977; Chauvenet et al., 1986). In addition, the evolution of these electronic modules with the aim of applying the anticoincidence technique (Bouchard, 2000; 2002) makes it possible to count coincidences indirectly without the use of a resolution time. This technique is particularly interesting for the measurement of radionuclides with metastable states of a few ms such as 67Ga (Bobin et al., 2007).

Depending on the type of sources used, the measured activity can range from a few tens of Bq to several hundreds of kBq. The standard uncertainty is in the order of 0.1% for radionuclides such as 60Co. 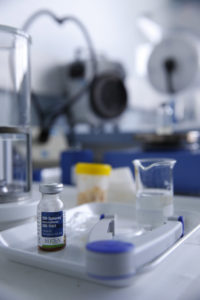