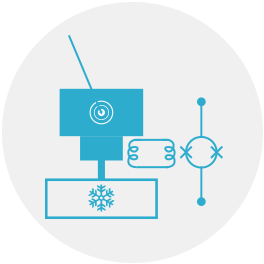 In various fields of ionizing radiation metrology, cryogenic detectors can provide better performance than conventional detectors, and in some cases a redundant measurement method based on a totally different detection principle.

For several years, the LNHB has chosen to focus on the development of metallic magnetic calorimeters (MMCs), the type of cryogenic detector best suited for its applications. The radiation absorber is made up of a noble metal (gold, silver or a combination of the two) with a high atomic number and a high density that allows for good detection efficiencies. The absorber is thermally coupled to a paramagnetic thermometer, consisting in a thin film of a paramagnetic gold-erbium or silver-erbium alloy and subjected to a magnetic field. The temperature increase resulting from the interaction of a particle in the absorber, is translated by the thermometer to a variation of its the magnetization. This is converted into an electrical signal via a superconducting quantum interference device (SQUID) magnetometer and amplified.

The current project covers several applications for this type of detector: nuclear and atomic data measurement, actinide quantification, and alpha and beta spectrometry.

In particular, the following objectives are targeted: