The photon beams delivered by the Varian TrueBeam medical accelerator installed on the DOSEO platform are now the reference beams used for calibration of clinical radiotherapy centres. This required new metrological references in terms of absorbed dose in water. 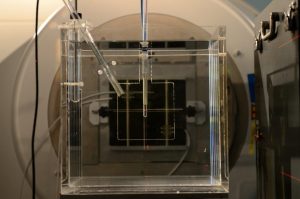 Achievements:
Water and graphite calorimeters are used at LNHB as primary instruments for photon and electron beam measurements of the absorbed dose in water.
In the case of the Varian TrueBeam accelerator, calorimeters were used to determine the calibration coefficients in absorbed dose to water of 3 reference ionization chambers for the different beam qualities delivered (6, 10, 15 and 20 MV). They are plotted according to a beam quality index called TPR20,10 (Tissue Phantom Ratio 20,10).

Major results:
The uncertainty obtained on the calibration coefficients of the ionization chambers is about 0.5%.
The results showed a good agreement with the calibration coefficients previously obtained from graphite calorimeters on the beams of the old LNHB accelerator (Delphes, Saturne 43).
The equipment redundancy (graphite and water calorimeter) at LNHB is unique in Europe. It provides references based on two independent methods and thus consolidates its references by improving the control of uncertainties for the calibration of clinical centres.