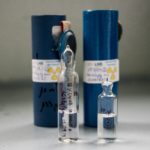 At the LNHB, a laboratory is dedicated to the preparation of radioactive sources, whose nature differs according to the measurement methods used: the universal source does not exist!

In order not to lose radioactivity on the walls of the containers when preparing the sources, a preliminary stage will allow saturation of the sites. For this purpose, the material to be used is rinsed with a carrier solution containing the stable isotope of the radionuclide (or at least a chemically close element with the same oxidation and complexing state).

The radioactive samples are prepared from concentrated solutions whose activity can be accurately measured. Weighing being more precise than volume measurements, all dilutions and deposits of active substance are carried out by gravimetry.
The sources (excluding large volumes for γ spectrometry) are prepared by differential weighing using a pycnometer (plastic vial with stretched end), on a high-precision balance (microbalance), which makes it possible to avoid uncertainties in linearity and accuracy of the balance. Radioactivity sources are generally calibrated by mass activity (Bq.g-1).

For measurements by α spectrometry, electro-deposited sources are prepared.
For γ spectrometry, several types of sources can be measured: liquid sources of various geometries (1 to 3000 mL) or point sources by deposition on mylar® film of a few milligrams of radioactive solution which will be dried before being sandwiched with terphane®. The 4πγ well-type measurement sources are prepared by depositing a few milligrams of radioactive solution on mylar® film. The deposit is then dried and sandwiched with terphane®.

For 4π proportional counter measurements, very thin film deposits are necessary. This technique consists in making a thin film that will be metallized (laying a gold conductive layer). A coating of a layer of latex is then electro-pulverized. The metal thickness can be adapted according to the emission energies of the radionuclides studied, while latex microspheres optimize the drop spreading on the support. The radioactive solution is then deposited on the support and dried.
The deposition of radioactive material in liquid form can be dried at room temperature by conventional heating, optimized heating (primary vacuum with nitrogen blowing) or freeze-drying.
The laboratory also has shielded production lines, allowing the handling of highly active elements and/or short half-life elements (e.g. radiopharmaceuticals), reducing radiation exposure.

The fields of application of ionizing radiation are subject to increasing demands from society in terms of transparency, environmental control and the safety of nuclear installations in particular. In order to ensure the transfer of references to users, the LNHB organizes every year and for more than 45 years, interlaboratory proficiency tests for laboratories measuring radioactivity. Thus, 5 to 6 tests are organized annually, allowing traceability at the national level.
The LNHB is in charge of sample preparation (multigamma, H-3 solution, spiked filters, spiked environmental matrices, gases…) whose activities can vary between 2 and 200 000 Bq in geometries varying between 1 and 3000 mL. The chemical solvent must ensure the stability of all the chemical elements present. The LNHB determines the assigned mass activity values for each radionuclide. The samples are then sent confidentially to the individual participants. The LNHB stores some samples for homogeneity and stability measurements over the duration of the test. After identification and quantification of the radioactive elements present in the sample, the laboratories return their results and associated uncertainties and the LNHB carries out the final processing of the results.

The participants’ measurement results are then compared with the “assigned” values measured by the LNHB. There are several ways to estimate laboratory performance: relative deviation, standard deviation, and z-score.
For example, for the relative deviation, the participant’s score may be: Acceptable (< 15%), Questionable (between 15% and 20%) or Discrepant (> 20%). The LNHB then publishes a summary report and a nominative certificate of participation for each participating laboratory.