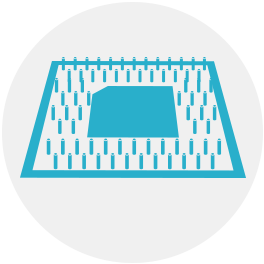 The LNHB has acquired a long experience in the design and construction of cavity ionization chambers, primary standards for characterizing high energy photon beams in air kerma. These chambers are spherical or cylindrical-spherically shaped instruments with an air cavity of precisely defined volume, with an outer wall and a central electrode made of graphite. Such an instrument was recently realized for the characterization in air kerma of a photon beam of about 7 MeV realized in the laboratory from one of the beams of its medical accelerator. This beam is intended for the calibration of radiation protection dosimeters used in nuclear environments.

Standard chambers of this type are being manufactured for several European NMIs to equip them with primary instruments for their air kerma references for cobalt 60 photons.

Radiopharmaceuticals used in diagnosis and therapy should be measured for activity before injection to the patient. This measurement is done in nuclear medicine departments by means of activimeters (well-type ionization chambers) that must be calibrated using transfer instruments connected to the national laboratory with standard radioactive sources measured by primary methods.

For some products with a very short half-life (a few minutes), the only way to connect the activimeters would be to calibrate them on site with a primary measuring instrument. However, there is currently no such device that can directly measure the levels of activity encountered with these injectable solutions. The purpose of this first study is therefore to develop a primary activity measuring device for the direct measurement of high activity radioactive solutions. This apparatus shall include a microfluidic sampling system calibrated in terms of flow and volume, an optical system for the measurement of activity by the TDCR method (Triple to Double Coincidence Ratio) based on the transformation of ionizing radiation into light pulses and a signal processing system enabling the volumetric activity of the solution to be measured. This device will be used to calibrate on site the activimeters of nuclear medicine services.

A second study deals with the development of a new secondary instrument for measuring the activity of high energy pure beta-emitting radionuclides with a reproducibility less sensitive to container inhomogeneity than the ionization chambers used in hospitals. The principle of the new measuring device is based on a counting mode operation in order to be less sensitive to the variability of the energy distribution of the Bremsstrahlung emitted along the electron path (Bobin et al., 2017). In order to reduce the risk of saturation of the counting for high activity (> 1 GBq), a low detection efficiency will be obtained by using the Cherenkov threshold of the emission of optical photons produced following the interaction of Bremsstrahlung in a transparent environment. This counting mode has the advantage of being able to maintain a well-type geometry similar to that of the activimeters.

The risks associated with thoron (220Rn) have long been known in the field of thorium compound handling. The concentration of thoron in France is estimated to be one-tenth that of radon (222Rn), but is rarely measured. Due to its very short radioactive half-life of 55.8 s, it was not possible to use the same metrological traceability chain as radon. A new standard instrument has therefore been developed and validated to connect instruments for measuring thoron volume activity in air.

The designed measuring device is a volume composed of a silicon semiconductor detector coupled to an electric field that captures solid, electrically charged descendants of the thoron at the detector surface. Simulations with a deterministic code allowed the shape and dimensions of the device to be optimised in order to obtain an effective electric field for capturing these descendants despite a rapid flow rate inside the measurement volume. Monte-Carlo calculations have also defined the detection efficiency of the device and the shape of the alpha spectrum. The detection efficiencies calculated for the measurement of radon and thoron were validated experimentally with a radon standard atmosphere produced using a specially designed dilution set-up. Analysis of the alpha spectra obtained made it possible to accurately qualify the volume activity of a thoron atmosphere with an associated 1% relative standard uncertainty.

The portable device thus made it possible to calibrate the thoron atmosphere produced in the BACCARA laboratory, the experimental set-up of the IRSN Aerosol Physics and Metrology Laboratory dedicated to radon metrology studies.

A conventional nuclear instrumentation is composed of electronic modules dedicated to the different functionalities specific to the signal processing provided by a nuclear detection system. In particular, in order to meet the metrological constraints in terms of uncertainties on the primary measurement of activity (about 0.1% depending on the radionuclide measured), the LNHB has developed a specialized analog electronics to apply an instrumental management of counting losses in a detection system (saturation, post-pulses, etc.). For example, a specific module has been developed to process coincidence countings between three photomultipliers for the TDCR method (Bouchard and Cassette, 2000). The associated electronics is based on the use of a common three-channel extendable dead time and the measurement of live time. Based on the same principle, the MTR2 module (Bouchard, 2000) is used for primary measurements by the well-type crystal and coincidence methods.

Since the mid-2000s, the availability of digital boards equipped with high-speed digitizers with frequencies above 100 MHz has made it possible to consider the evolution of primary measuring instruments. In particular, these devices offer the possibility of digitizing signals as close as possible to the detectors and processing the signal using digital components of the FPGA type (Field Programmable Gate Array). In addition to the advantage of having a more compact instrumentation, the transition to digital technology also aims to ensure the durability of the primary measurement installations through an algorithm implemented in a programmable component. This trend has become widespread in a large number of national laboratories. The common practice is to record signals’ information of interest (time stamping, amplitude, etc.) and then perform offline processing of countings, dead times and amplitude spectra (Keightley and Park, 2007).

Since 2007, the laboratory has been contributing to this evolution by exploring the possibilities of on-line signal processing in an FPGA system (without the need for additional dead times). The first studies were carried out in the case of instrumentation dedicated to TDCR (Bobin et al., 2010) and well-type crystal methods (Censier et al., 2010a; 2010b). A first stage of validation of a digital device focused in particular on the on-line processing of dead times generated by liquid scintillation post-impulsions at the FPGA circuit. This study also led to the development of a new technique for coincidence counting using a time-to-digital converter specific to the TDCR method (Bobin, 2011). Following satisfactory initial results, a multi-detector platform has been developed to explore the capabilities of FPGA circuits in the case of real-time processing of all the functionalities of a primary activity measurement system using the anti-coincidence technique. Its application is generally based on the use of a scintillator detector (NaITl). A front-end electronics specific to this detector has also been developed (Bobin et al., 2014).

A new study uses these results to create a real time instrumentation dedicated to low noise gamma-ray spectrometry for environmental measurements (HPGe detector coupled with anticosmic and anti-Compton veto systems). A digital device will allow a bi-parametric acquisition for the implementation of an anti-Compton veto. The detection limits will be significantly reduced by reducing the photon Compton background which interferes with the identification of trace radionuclides.
This new digital device can also be used for primary activity measurement using the coincidence method.